What to do in Belgrano

What to do in Belgrano, discover everything that this great neighborhood has to offer you!

Being one of the largest and most numerous neighborhoods at the population level of the city of Buenos Aires, it concentrates several points that are icons of Buenos Aires, as well as the busiest.

Currently, the well-known Chinatown, a unique piece of this style in the country, has become popular among the locals, and, also, very close, there are traditional and beautiful places that write the history of Belgrano on its way from town to neighborhood.

Despite being the least chosen neighborhood to visit by foreign tourists, or even by those who visit the city for the first time for a couple of days, it offers a beautiful walk, with many attractions to enjoy and learn about.

You can get there by subway and get off at the Juramento station, and, in this way, you will be able to visit the Redonda Church, Barrancas of Belgrano, the Sarmiento Museum, the Larreta Museum, and the Chinatown (which can be reached by taking the Train directly Mitre to Tigre and get off at Belgrano station). In turn, you can visit the Yrurtia Museum if you have time.

For the visit to Belgrano R, with its imposing mansions and aristocratic streets, we recommend leaving it for another day, since you have to move more than what we propose here. 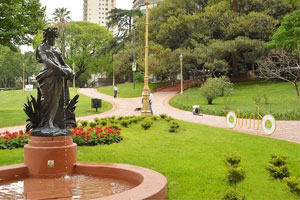 In a natural ravine, which was the coast of the river, the Barrancas de Belgrano are located. It is a typical walk in this neighborhood, which were designed by the renowned landscaper Carlos Thays, on land bought by neighbors at the end of the 19th century.

It is a sequence of squares on a natural slope, formed with unique paths and with a romantic air, that connect the Chinatown and the Barrancas de Belgrano station with the residential area, formed by picturesque buildings and towers.

It has a roundabout, under the name of “Antonio Malvagni”, in honor of the founder of the Buenos Aires City Symphonic Band, which frequently performed in this open-air space. Today, it lends itself as a place for various night milongas. 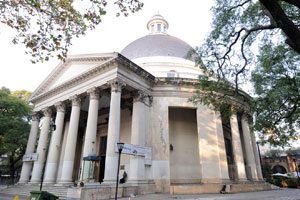 Also known as the Parish of the Immaculate Conception. Its construction began when the Belgrano neighborhood was still a separate town from Buenos Aires. It was inaugurated in 1878, becoming an icon of the urban landscape.

Next to this beautiful church, there is a pedestrianized beach with several picturesque ice cream parlors and cafes very similar to Ancient Rome. On weekends, the square is stained with a fair.

Also, you will find very close to this place, the Sarmiento and Larreta Museums, which we will mention below. 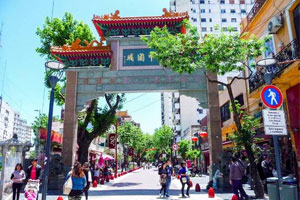 In the last time, it became one of the fashionable places of the city. Located in a strategic place, at the intersection of three important blocks in the neighborhood: next to the Mitre Railroad tracks, the Belgrano C station and Arribeños street, one of the best known in Belgrano.

The Asian community has been concentrated here for many years, including Taiwanese, Japanese, Chinese and Korean, with its stores that sell products that you will only be able to find here. At the same time, you will find typical restaurants, with a variety of dishes unique to their culture, a cultural walk full of murals, sculptures, Buddhist temples and a huge Chinese arch as the gateway to the neighborhood.

Prepare your camera to enjoy all the images that you will be able to capture there!

Here, too, the Chinese New Year is celebrated, and a unique oriental experience is lived. For them, it is one of the most important dates of the year and they celebrate it in a big way!

The reality is that the whole neighborhood cuts enough with the colonial aesthetic of Buenos Aires, to bring a bit of color and cultural exchange to the city. Here you’ll have more information! 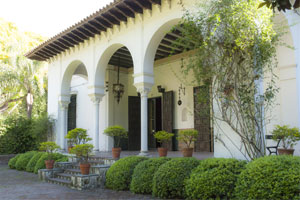 The Sarmiento Historical Museum is very close to the Redonda Church. Located in an old building which was previously the Municipality of the Town of Belgrano, long before it was considered part of the city as a neighborhood that it is today. In this same building, the federalization of the city was declared ending the civil war of 1880.

This museum is dedicated to the generation of the 1980s, specifically, to Presidents Avellaneda and Sarmiento, as well as to the founding process of the federalization of Buenos Aires.

In turn, crossing Av. Juramento, you will find the Larreta Museum of Spanish Art. It is the former home of Enrique Larreta, a cultist of Spanish literature, as well as its culture. You will be able to enjoy its colonial-style house, as well as the beautiful Andalusian garden and its unique repertoire of Hispanic art in the world. 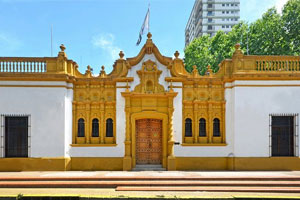 His house was a donation along with his collection of various works by renowned Argentine sculptors and painters such as Quinquela Martín and DellaValle.

The donation had the character of “gratitude to the country” that allowed him to travel and study in Europe.

Currently, given the COVID-19 situation, it is temporarily closed. Here we leave your website so that we can be informed. 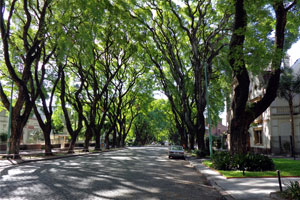 The area of ​​Belgrano R is part of the Barrio de Belgrano, which includes the streets around the train station.

Full of low houses, huge luxurious mansions and tree-lined streets, which give it an air of a sophisticated and aristocratic place within the same city.

A great plan to walk calmly, recreating the view with the beautiful houses and its marked architecture, at the same time as the peace of its streets.