House in the Sky

House in the Sky, a Mar del Plata style house built long before the Obelisk of the City.

Buenos Aires has thousands of stories to tell, and this beautiful house that is out of tune with the architecture of the city is one of them. Clearly, it’s going to catch your eye when you see it! 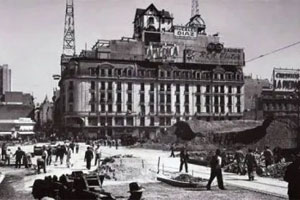 Located in the heart of downtown Buenos Aires, your gaze is directed towards the Obelisk, with its location on the top floor of a building that today is purely for offices.

But its history begins with its construction in 1927, on Sarmiento Street 1113, a few steps from Av. 9 of July. Its creation was long before that of the immense Buenos Aires Obelisk. We owe its existence to Rafael Díaz, a Spaniard who immigrated in the 20th century, bringing his dream of having a House in the Sky.

Entrepreneur and owner of “Muebles Díaz”, a furniture business of all styles, which used the 9 floors of the building where today this beautiful Marplatense Chalet type house is located. You may wonder the reason for building a house on the top floor of an immense city building: Díaz lived in Banfield, a Buenos Aires town that, at that time, was not easily and quickly accessible, so Díaz needed a place to rest in the middle of his workday. Faced with these inconveniences of not having the time to go home to rest and return, he decided to create a place to have a quiet lunch and take a nap during work break. 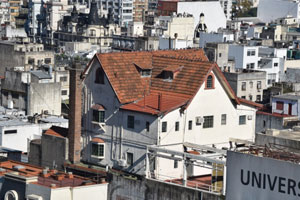 So it was that, this beautiful chalet had its place on the 10th floor of its furniture building. Following his preferences, it has all the characteristics and details of a Chalet with French Norman style, traditional from the houses of Mar del Plata, his favorite city.

Simple in structure, it has two floors and a loft, and a direct view of the Obelisk. What’s more, in 1936, Díaz witnessed its construction! In addition, we can add his drive towards high-end advertising, as he was the first to use his leisure house to display a huge poster advertising his Furniture Store. In this way, he has managed to immortalize the brand in all the photos taken at that time.

His performance and history is not merely about furniture and rest houses, but, in addition to all that, he had the pleasure of having his own Radio, called LOK Radio Mueblería Díaz, which, today, is the renowned Radio Rivadavia. 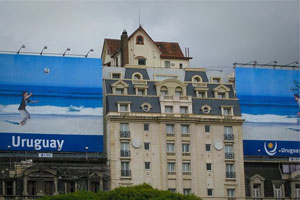 He died in 1968, leaving his heirs in charge, who rented all the floors of the building for office use, as well as, the beautiful villa was used as a photography studio and dining room for those offices.

In 2014, the Chalet of the Sky was declared a Cultural Heritage of the City of Buenos Aires, which is why it became an untouchable place without prior intervention from the Ministry of Culture. That is to say, no type of modifications can be made to this immortal coastal chalet without authorization.

Today, the ceramic floors with their originals remain intact, as well as the chandeliers from the beginning of the century that hang from their ceilings.

It has been uninhabited for 40 years, but there are several future projects to transform this beautiful place into a cultural hub, with many spaces and ideas for different cultural activities.

To see this beautiful House in the Sky, you just have to pay attention and raise your eyes!

If you want to know more about this area, we recommend our Free Tour City Center!