Domes of Buenos Aires, a tour for you to enjoy the history of these beautiful structures that have the best buildings in the city.

As you may have noticed, Buenos Aires has a European style and charm that makes it stand out as an assemblage of fashionable architectural varieties, depending on the area you visit.

Some buildings have an added beauty, which enhances them and stands out even more. That addition, are the picturesque and enormous Domes that decorate and magnify the top of each one.

If you raise your eyes to the sky, you can enjoy and discover the details of these architectural ornaments in the most recognized buildings in Buenos Aires. 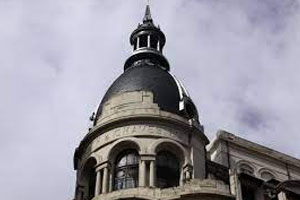 From the end of the 19th century and the beginning of the 20th century, its splendor became more present, because it was the element that architecture used the most to frame street corners, as a symbol of progress of the country’s bourgeoisie. This ornamentation gave even more value to the properties.

For this reason, the owners of buildings and hotels, not wanting to stop being up to the task, generated the boom of domes throughout the city.

They are a fusion of diverse styles and, even, a mixture of all of them. The styles that predominate are Spanish, Arabic and Russian, fused with Art Nouveau at the time of the rise of Europe. In this link, we leave you a note with all the details of this style! 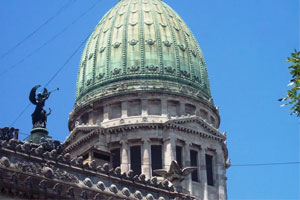 Most of the Domes of Buenos Aires are located on the well-known May Avenue, in the heart of downtown Buenos Aires. To learn more, we invite you to join our Free Historical Center Tour here! In turn, walking through Courts and Congress, you will see many buildings adorned with domes, the most important being that of the National Congress. It is 80 meters high!

Continuing the path along May Avenue, at the height of 1400, you will see a building with the name of “La Inmobiliaria”. In this case, it has two identical domes at the ends, both of which are red. In turn, nearby is the Barolo Palace, which is completely considered a diamond of architecture. On the dome, you will see a lighthouse, which has a panoramic view of Buenos Aires. 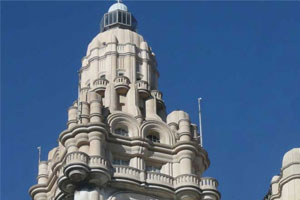 In the House of Culture, the Goddess of Wisdom Pallas Athena crowns the building, as well as the huge green domes of the National Bank. At the intersection of Florida and Perón streets, you will see the Chaves and Gath building, which, after the restoration of the City Government, has a dazzling splendor!

In front of Lezama Park, changing area and going to San Telmo, you will be surprised by the turquoise domes that finish the building of the Church of the Holy Trinity. There are five domes in total, and due to their size, they will attract your attention. Also, a few steps from Dorrego Square, is located the San Pedro González Telmo Parish, the oldest in the city.

Moving away from the tourist centers and moving around the area, we will go to Caballito, more precisely on Rivadavia Avenue and Ayacucho, where the Dome that honors Antonio Gaudi is located. All glazed, it was restored in 1999, with an iron weather vane and a telescope on the last level. Here we tell you everything you can do in Caballito!

We hope you enjoyed this tour, and always remember to keep your eyes up to marvel at the architectural details of the city. You will find many things to admire and enjoy!