Population of Buenos Aires, we will tell you how many inhabitants this immense central city of Argentina has.

Variety of renowned people have spoken a lot about this great city. We want to underline the reference to Buenos Aires given by the Argentine poet Ezequiel Martínez Estrada. He himself recognized this city in resemblance to “the head of Goliath”. He used the recognized metaphor to give an image to the magnitude that the city of Buenos Aires has, compared to other more desert landscapes.

So that we can understand it, Buenos Aires is in second place as the largest city in South America, below São Paulo in Brazil.

It has two important areas which are the Autonomous City of Buenos Aires (CABA), the cultural and economic financial center of the country; and the Greater Buenos Aires area, which surrounds it. 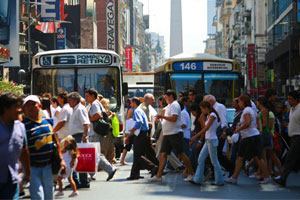 According to various gauges, Buenos Aires has 17,541,141 people (data that are updated by births and deaths), and only 3,075,646 live in CABA. The rest of the main number are in the metropolitan area, and they move to the downtown to go to work.

The inhabitants of Buenos Aires are known as the “porteños”, since their place of residence is close to the port, the main source of income for the city since 1879. Thanks to that first port, designed by the engineer Luis Huergo, There has been a huge wave of immigrants, thus changing the demographic situation of the city.

Currently, most of the population of Buenos Aires is characterized by having Italian or Spanish grandparents, and from there, their descendants. 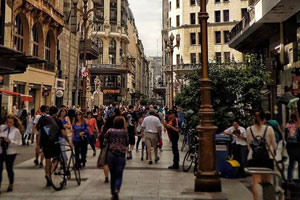 As in the big cities, a bit of the colonial past of Buenos Aires has been lost. In some neighborhoods located to the south, near the port, you will be able to find a bit of that beautiful and old style that the city had. The rest became more modern buildings and skyscrapers with a more current style.

To discover this wonderful colonial city, we invite you to take the San Telmo Free Tour and enter the most beautiful streets of Buenos Aires.