The Grave of Evita

The Grave of Evita, and everything you need to know about the bed of this iconic Argentine character, located in Recoleta. 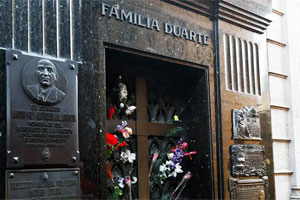 Her grave is one of the ones that people visit the most when they frequent the Recoleta Cemetery. Moreover, it is very likely that you will go and find fresh flowers from the people who visit it.

However, we know that many of the tourists who visit her grave do not know as much about this woman so important to the history of our country, or that they simply recognize her from the Andrew Lloyd Weber musical where Madonna played the role of Evita.

For these reasons, we want to tell you, as briefly as possible, everything there is to know about Eva Duarte de Perón (popularly known as simply Eva Perón), before going to visit her grave. 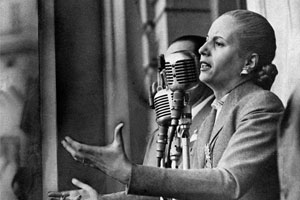 Her full name is María Eva Duarte de Perón, born in 1919 in La Pampa, as part of a fairly poor family. At the age of 15, she decided to move to Buenos Aires to start her acting career. There she met Juan Domingo Perón, and the following year they were married.

When Perón assumed the presidency of the nation, she became the First Lady of Argentina from 1949 to 1952. Her passion for politics and the socialist cause, put her on the front page of many news, before her struggle for the rights of workers and their leadership in the Peronist Feminine Party, as well as in the fight for the female vote.

Many nationals have a very deep love for Evita, as well as, there are many others who have a completely negative feeling towards her.

Critics and opponents state that the Perón / Duarte marriage has used their political power to imprison opponents, train businessmen and indoctrinate children.

If you are still interested in knowing more about this important national character, what they did with his corpse and all the information about Evita and her history, we invite you to join our Recoleta Tour.