Weather of Buenos Aires, a set of fundamental tips so that you know the climate that you will face when you arrive in this immense city, depending on the time in which you visit it.

Located on the banks of the Río de la Plata, Buenos Aires is known as the largest city in the country, and its atmosphere contains a lot of humidity. 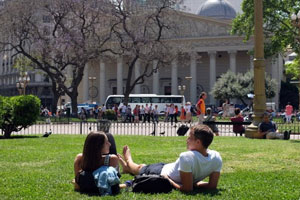 This humid characteristic suffers greatly in summer, in addition to the high temperatures of this time; and, in winter, it is also felt more, due to the same cold that penetrates to the bones.

The general climate of the city tends to be temperate, with temperatures not higher than 30ºC in the summer season and not falling below 0ºC in the winter season. January is known as the hottest month, February as the rainy month and July is the coldest month of all.

The rains will vary depending on the season of the year, but during the summer (from December to March), you will experience intense rains in short periods of time. You can get to live a strong storm in the same day, but after a few hours the Sun appears in a clear sky. Obviously, it can happen the other way round too! 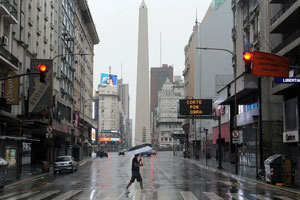 In the autumn season (from March to June) and winter (from July to September), the rains are usually regular and last longer. It can happen to live a full week of rain.

Although it is not usual for it to snow in Buenos Aires due to its environmental conditions, it has happened historically in two moments: the first in 1918 and the second in 2007. But, do not be deluded, it is not a city whose climatic characteristics include snowfall.

It is important to clarify that, due to global warming and climate changes that have been experienced throughout the world for a few years, the weather situation is affected and quite chaotic. Obviously, Buenos Aires is not exempt from this change, so its climatic condition is transforming from a temperate place to one with more tropical characteristics: more rains and higher temperatures with each calendar year.

For this reason, our recommendation is that you check the forecasts closer to the date of your visit, to know what awaits you. Having an umbrella in the suitcase, a change of summer clothes and a little coat would be the ideal combination.

To know more about the important details to visit the city, we leave you more information here!