What to do in Boedo

What to do in Boedo, everything you need to know to discover a new neighborhood, with a lot of history to tell and not so well known!

Although it is a neighborhood that does not appear in the traditional tourist routes of Buenos Aires, it is one of the most mentioned areas in Tango songs, in national literature and even in the history books of Argentina. 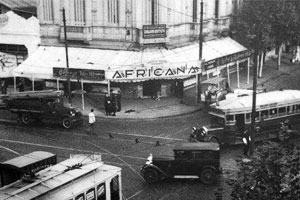 It bears this name, in honor of the hero of the Independence of Argentina: Mariano Joaquín Boedo. He was the national deputy of the province of Salta, active in the days of 1816, which resulted in the Independence of our country. For this same reason, his figure was rescued in 1882 so that a street in the city would have his name.

At first, it was a semi-rural area, bordering Boedo Street (currently Boedo Avenue, which is one of the main streets of the neighborhood). At the beginning of the 20th century, theaters and cafes sprang up, streetcars arrived, and the population increased due to the arrival of immigrants from Europe. Another reason that this neighborhood began to be populated was the yellow fever epidemic, where the upper classes from the south moved north, leaving that area for the lower classes of society. The same situation that was experienced in Boedo was felt by San Telmo, Barracas and La Boca, all neighborhoods in the southern zone. In all this context, Tango emerges as a new means of suburban social expression, in addition to generating new cultural expressions where thinkers and writers further exposed this separation. 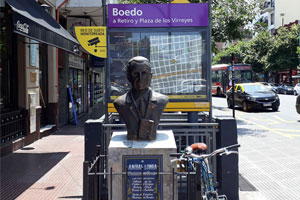 To start the tour of the Boedo neighborhood, the best thing we can do is start from the corner of Boedo and San Juan Avenues, where the “Boedo” Line E Subway Station is located. You will recognize this Subway line by its violet color. Although it is not a visually attractive corner, it is a point that you will want to visit to feel the history of this place, since it is the most famous and important corner in the neighborhood. This intersection is part of the renowned Tango “Sur” of the famous Argentine composer Homero Manzi. Right there, you will come across the first Notable Bar to visit: Esquina Homero Manzi (Homero Manzi Corner). You will be able to enjoy live Tango Shows, in addition to enjoying a unique space, it is a very important cafe, which has been declared a National Historic Site. Without a doubt, it is a mandatory step! Here is their website for more information. 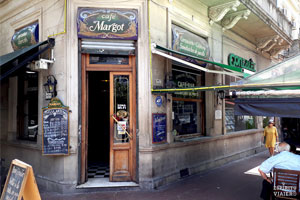 If we continue along Boedo Avenue, going to the opposite side of the highway, heading north, you will be able to visit another important bar: Café Margot, declared a Notable Bar thanks to its cultural legacy, hosting meetings of great tango artists, writers and artists. from the neighborhood It has an extensive menu of options for all tastes that you can accompany with excellent craft beers. Its specialty is the pavita sandwich!

On the same avenue, you will see different sculptures in both directions of the street, which are a representation of a variety of cultural situations and different characters.

Also, there is the Monte de Piedad Museum on the second floor of the City Bank (Banco de la Ciudad) building. On this site, the recreation of the history of the Monte de Piedad is carried out, a pawn institution that became the Municipal Loan Bank, until it became the current City Bank. Here, history is traced from 1878 to Argentina’s economic crisis in 2001. 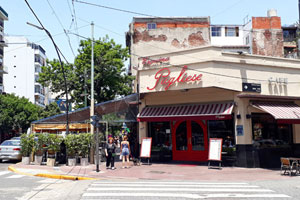 In the next corner, you will be at Osvaldo Pugliese Corner, in honor of the most important director, composer and pianist of Tango in the country. Despite having a slightly more modern aesthetic than the places mentioned above, it is an ideal place for you to stop. Here is their website for more information.

Although it is not a neighborhood with much of an architectural legacy, we recommend that you pay attention to the signs, since you will be able to transport yourself to the past with their characteristic design and filleting. 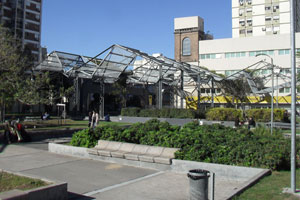 What you will not find here are huge squares or parks, since it is the neighborhood with the least amount of green spaces in the city. Likewise, it has the Mariano Boedo Square, which is the only green lung in the area. Before, it was the bus station, but now, it is a space where you can rest for a moment, get out of the hustle and bustle of the avenues and breathe a little fresh air among the trees. Many times, fairs of different styles are held!

Formerly, Boedo was the headquarters of the San Lorenzo de Almagro Stadium, a first division soccer team. Today, in that same place, you will find a large supermarket of a well-known franchise. Likewise, the idea of ​​recovering the space to have the San Lorenzo stadium again is not ruled out, given that its fans continue to try to achieve it!

What makes this neighborhood stand out from the rest is its cultural richness. All the time, you will feel a very neighborhood and tango sensation. Although it is a simple place, it will give you many postcards of the Buenos Aires tradition.

Moving about 7 blocks from San Juan and Boedo, you will be in the neighborhood of Caballito and here we tell you everything you can do!