Floralis Generic Buenos Aires, one of the most imposing sculptures in Palermo.

It is a metal structure, which is approximately 20 meters high. It is located in the United Nations Plaza, in the heart of the Palermo neighborhood. 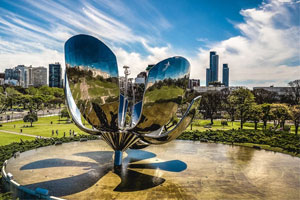 It is a donation from Eduardo Catalano, author of this sculpture, Argentine architect.

The entire structure is made of aluminum and stainless steel, weighing 18 tons in total. It is the first sculpture with movement, which is controlled through photoelectric cells and a hydraulic system. 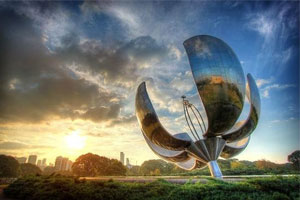 The most striking thing about this giant flower is the electricity system, by which the automatic opening and closing of its petals is achieved, which coincides with the time of day and exposure to light. During the night, in the dark, the flower remains closed, with a red glow inside. In the morning, it opens its petals greeting a new dawn. In this way, the process of nature is imitated, where also, if there are strong winds, the flower closes again with the same mechanism.

Its petals open at 8am and close at sunset. The schedule varies depending on the season of the year, so it cannot always be measured in the same way.

There are only four nights of special festivities in which the flower remains with its petals open, which are: May 25 (Day of the Argentine Revolution), September 21 (Spring Day in the country), December 24 (Christmas) and December 31 (New Year).

Here we leave you a section with the best monuments that you can see in the city.

To know everything you can visit in Palermo, follow this link!