Monuments in Buenos Aires, a guide that goes through the most important and recognized Historical Monuments of the city, as well as strolling through the popular neighborhoods.

Buenos Aires is not only a huge city, but it is also the cradle of endless attractions, varied architecture and thousands of different activities that are worth enjoying, visiting and getting to know.

Among the attractions that embellish it, we find the Historical Monuments. Some are characterized by being icons of each neighborhood where they are located, others are gifts that we receive from friendly countries, and some others are commemorations of the most important characters in our history.

In addition to the beautiful and luxurious Palaces (here you can access more information) and the wonderful Domes that adorn the city (to know more, here we leave the link), the Monuments deserve a separate mention.

Let’s immerse ourselves in this wonderful world, by neighborhood, of the Monuments in Buenos Aires:

This fountain was a gift that Argentina received from Germany, on the centenary of our country. The reason was to offer thanks for receiving German immigrants in Argentine territory. It was installed in 1910, but its inauguration did not take place until 1918.

The figures it possesses represent Agriculture and Livestock, important items in the development and economy of the country. It is located in Alemania Square, Av. Del Libertador 2699.

The Magna Letter and the Four Argentine Regions 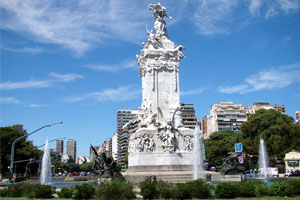 It is known as the “Monument of the Spanish”, located between Av. Del Libertador and Av. General Sarmiento. It was a donation by the Spanish community, also in the celebrations of the Centennial of Argentina in 1910. Its base is formed with allegories to the Río de la Plata, The Work, The Andes, Pampa and Chaco.

In this case, it is a tribute to General Justo José of Urquiza, one of the most important historical figures in the country. It is located between Avenida Sarmiento and Figueroa Alcorta, it was inaugurated in 1958.

It is a granite and bronze sculpture, bearing the General Constituent Assembly at its base, in bas-relief.

This other monument is a commemoration and tribute to General José of San Martín, known as the hero of our history. Here you can learn more about this iconic Argentine hero.

You may wonder why the sculpture is titled, because it is a memory of the last moments of his life, in civilian clothes and surrounded by all his granddaughters. You will find it between Av. Mariscal Castilla and Calle Aguado.

Here we tell you more about what you can do in Palermo!

The Atlas of Recoleta 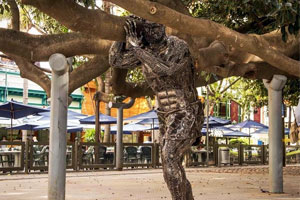 Made with auto parts, you will notice that it is an imposing figure, which is located in San Martín of Tours Square.

It weighs 250kgs and carries the oldest tree that exists in Buenos Aires, planted in 1781. It is a Gomero, and the sculpture itself is what supports it.

You can see it between Posadas and Bioy Casares streets.

Paying homage to the first mayor, it was inaugurated in 1900 in the middle of Plaza Alvear.

It is located between Pueyrredón, Alvear and Del Libertador avenues. It has bas-reliefs that depict the most important events for the city. In turn, it is supported by a Doric column and has a bronze figure that symbolizes the “Glory”.

From France to Argentina

Also received as a gift from the French community before the Centenary of the Argentine May Revolution. It opened in 1910 and is located in the middle of France Square.

In this link, you can learn more about this beautiful green space so popular!

It is a donation to the city by a famous architect in 2002.

It is a huge metal flower, surrounded by beautiful gardens and in the center of the lake. It has a mechanism through which its petals open and close in relation to sunlight.

Opening and closing times are subject to the time of year due to light exposure, but it usually opens at 8am and closes at dusk. The idea of ​​this structure is to simulate the process that a real flower performs.

To know everything you can do in Recoleta, here is a link!

Also, we invite you to join our Recoleta Free Tour here and learn more about this area and its attractions.

It is located right in front of the entrance to the Ecological Reserve of Puerto Madero (access more information here!). It is an attractive and well-known icon of the area.

It is a fountain made of Carrara marble and pink granite, whose main figure is the Goddess of Venus, accompanied by Nereids and Tritons.

It invites us to surround it and spin around it, enjoying every detail, in addition to the fact that its shape is wrapped in a spiral.

It was declared an Asset of National Historical Interest in 1977 by the National Executive Power. 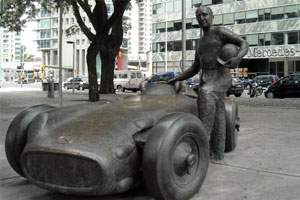 Successful and renowned car racer in Argentine automobile history, known worldwide for being one of the best of the time.

This monument honors his life in a life-size work of the figure of Fangio with his Mercedes-Benz W196, known as the “Silver Arrow”. You will find it on Boulevard Azucena Villaflor.

With 3 meters high, it is a steel sculpture that has the shape of a bellows in allusion to the most important tango instrument: The Bandoneón. Located on Azucena Villaflor 501 street.

Inaugurated in 1937 as a symbol of the union of the Spanish people with Argentina.

It consists of 27 bronze characters on a dragon red granite base, including Christopher Columbus, discoverer of America. At the top, you will see a seated woman and a standing young woman, who represent Spain and Argentina.

It is located at the end of South Coast, on España Avenue.

Here we tell you everything you can do in Puerto Madero! 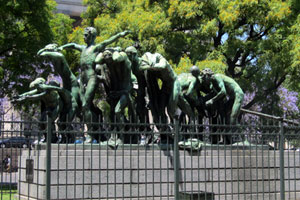 As an expression of liberation, of hope for common struggle and hard work, this monument was inaugurated in 1907.

There are 14 people made of bronze that drag a huge stone. It is located at Paseo Colón 800, in the Small Square Coronel Manuel of Olazábal.

Gift of the Uruguayan Government, this work is located in the middle of Lezama Park. To learn more about this park, you can follow this link.

It is a small boat, where it recounts the foundation of the city in its large bronze column, and culminates with a figure that represents “The Offering”.

So that you know everything you can do in San Telmo, we leave you the link here.

In addition, we invite you to join our Free Tour San Telmo here!

Erected on a polished red granite base and made of bronze.

Monument to the Fallen of Malvinas

25 black marble plates with the 649 names of the combatants who perished in the war against England in 1982. This monument has the 23 coats of arms of the provinces of Argentina, the Coat of Arms of the City and the National Coat of Arms.

In the upper part, it has the image of the Malvinas Islands, along with two soldiers who guard the place. An extra detail, it has a torch that is always on.

It was inaugurated in 1990 and you will find it at Av. Del Libertador 50, inside San Martín Square as well. 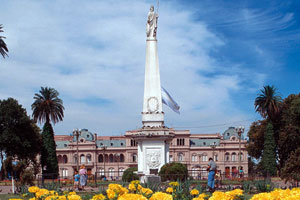 In this case, it is the First National Monument that the city of Buenos Aires had, in the heart of the Plaza de Mayo.

It was erected in 1811, reformed in 1856, commemorating the first anniversary of the Argentine May Revolution of 1810.

In 2005 it was declared a “Historic Site” by the Legislature of the City of Buenos Aires.

On the floor that surrounds this pyramid, you will notice several painted white handkerchiefs that are the Symbol of the Mothers of Plaza de Mayo. This group is known for its struggle and constant search for children kidnapped and disappeared during the military dictatorship.

If you want to know more about this historic Plaza, follow this link here!

In addition to being the emblem of the City, it was declared a National Historical Monument.

Inaugurated in 1936, in commemoration of the fourth centenary of what was the first foundation of the city.

For the first time, it was here that the flag of our Nation was raised. You will find it between Corrientes and 9 of July avenues.

Monument to the Two Congresses

Another monument that commemorates the celebration of the Centennial of the May Revolution. Erected in front of the National Congress, in the middle of Congress Square.

Of neoclassical design, it was inaugurated in 1914, symbolizing the Argentine Republic advancing with a laurel branch in one hand and the other leaning on the guide of a plow.

Two figures accompany its sides, representing the National Assembly of 1813 and the Congress of 1816. In addition, you will notice that it has a fountain, it is the representation of the Río de la Plata.

We invite you to join here our Free Tour City Center to learn even more about the history of this great city!