General San Martin Square, in the heart of Retiro, it is one of the oldest in the City of Buenos Aires.

It is a huge park, considered the lung of the Retiro neighborhood, which cuts off the hustle and bustle and traffic of the Downtown.

Inside this place, you will find large sculptures and monuments, as well as new and varied plant species, which were incorporated by the well-known landscape designer Carlos Thays. 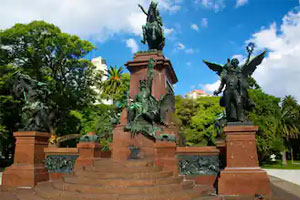 The sculpture that stands out the most is the one erected in honor of General José of San Martín and the Armies of Independence, on one of the main sides of the Plaza.

Here, several unforgettable historical events took place, such as the combat of 1807, which ended in victory, the installation of the barracks of the Horse Grenadiers Regiment by General San Martín in the year 1812. In 1878, it was commemorated by the centenary of his birth, granting him this enormous green space with his name, which, in 1942, was declared a Historic Site of the City. Learn more about this hero here! 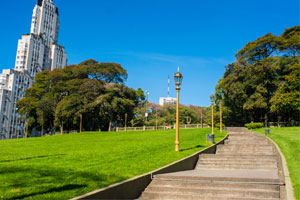 In turn, it has a playground for children, countless benches where you can sit and enjoy nature and the enormous number of trees it has: willows, palms and pines. In addition, a great variety of birds inhabit this place, surrounded by beautiful plants and flowers.

Undoubtedly, it is the ideal place to improvise a picnic and enjoy a break in the open air.

Given its central location, you will find a wide range of restaurants, kiosks, breweries and bars, so visiting this Plaza is a complete plan!

In front of the Plaza, you can see the Militar Circle and the Weapons Museum of the Nation, with different exhibitions. Here we leave your website. 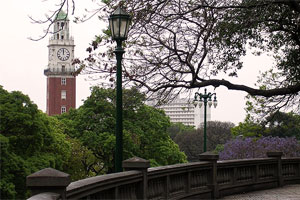 A few meters from the General San Martin Square, the famous Monumental Tower is located, popularly called English Tower, since it was a gift from the British Government for the Centenary of the May Revolution. Declared a National Historical Monument, it can be visited every day from 11 a.m. to 6 p.m., except on Tuesdays when it is closed. You will be able to access the incredible lookout and have a panoramic view of the City!

Any way of transport brings you closer to San Martin Square. The Subway Line C, has the exit directly to the square and the Museum of Weapons, so you must get off at the Gral. San Martín station. In addition, several bus lines bring you closer to this area. To come by bike, the streets have bike lanes to be able to move more safely, given the heavy traffic in this area.

Don’t miss out on this beautiful space in the middle of the City!

Here we tell you more green spaces for you to enjoy!