Memory Day for Truth and Justice

Memory Day for Truth and Justice, the whole story about one of the worst times in the history of Argentina.

March 24 is a day to remember and remember one of the harshest times in the history of our country.

Like International Women’s Day (we tell you everything here), this day is to reflect on the events experienced in 1976 under the coup d’état carried out by the military.

A time of persecution, repression, censorship in the media, assassinations, disappearances, a nefarious president in office and de facto, are some of the characteristics of the events suffered during this period, which must never happen again.

On the Day of Memory for Truth and Justice, all the victims that this dictatorship carried on its back during the Military Coup in Argentina are commemorated. Undoubtedly, one of the worst processes that the country had, proclaimed with the title of “National Reorganization Process” and suffered as the most violent military coup in history.

March 24 was chosen, since that same day, but in 1976, a coup d’état took place that managed to revoke the power of the Government to the wife of General Juan Domingo Perón (former Argentine president), María Estela Martínez de Perón. This fact brought about the beginning of the worst Military Dictatorship, violating and infringing the current legality of the State, overthrowing the existing regime by force to replace it with a much worse one.

This civic-military dictatorship was presided over by General Jorge Rafael Videla, who was president from 1976 to 1981, under the “Condor Plan” in coordination with the dictatorships of Paraguay, Chile, Uruguay and Brazil.

During all these years, human rights were constantly violated, with the victims subjected to an enormous amount of torture against humanity, crimes and murders. The true time of terror in Argentina, with the result of 30,000 disappeared. 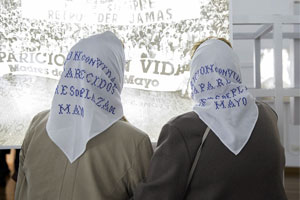 In 1983, before the return of Democracy with the Government of Raúl Alfonsín, the Mothers of Plaza de Mayo organization proceeded to carry out its first march in commemoration of the victims of State terrorism. Since then, they have become known worldwide, and every year they carry out marches and events to continue and make their struggle visible. It is about a group of mothers who are looking for the disappeared from this period, characterized by their white scarves. The floor of the Plaza de Mayo has handkerchiefs painted in honor of their tireless search and ongoing struggle.

In 2002, the Congress of the Argentine Nation proclaimed March 24 as Memory Day, a fixed and non-workable date. It seeks to make this day a date to remember those 30,000 disappeared and tortured people, in addition to reflecting socially and paying a moment of respect to the families that were affected and destroyed by this action.

The invitation is to re-think the society we want and visualize all the consequences of the loss of civil rights and democratic spaces. Advocate so that this does not happen again and defend our ideals without losing your life trying.

It tries to understand all the dangers that an action of this nature entails, in addition to understanding the need and importance of complying with our rights and democracy.

Every year, on March 24, different events are held to remember, commemorate and raise awareness of this type of terrible social event. In the Memory Park, the Memory Museum (here we tell you more) holds different music and poetry festivals, among others. In turn, marches are carried out demanding justice for the disappeared, along with other cultural activities, speeches, conferences and acts.

“Never Again” (Nunca Más) is the motto that heads this date, advocating that this never happen again, not now, not ever.

If you want to know more about the Argentine ephemeris, here we leave you more information!