Monumental Tower Buenos Aires, known by another name, is 60 meters high and has a lot to discover!

It is popularly called “The Tower of the English” since it was a gift from British residents for the Centenary of the Independence of Argentina and the First Government. 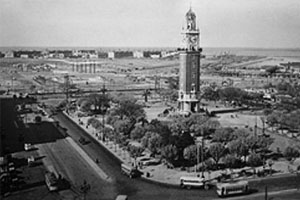 Built in 1916, 60 meters high, it is located where the Gas of Usina fuel distributor used to be in the Retiro neighborhood. Today, this place is known as the Argentine Air Force Square.

Witness the different waves of immigration during the 20th century, in addition to seeing in situ the urban changes that took place in its surroundings. Retiro became the neighborhood that opened the main doors to enter the enormous City of Buenos Aires.

Near the Tower stands the Immigrant Hotel, which today is a museum. In turn, this immense tower is located right in front of the General San Martín Square. Here you can learn more about this immense green space of Retiro! 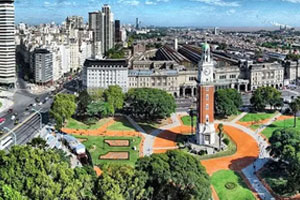 At its top, it has a viewpoint to achieve the best panoramic view of the neighborhood, in addition to being able to see the city’s port. It has 5 bronze bells weighing 7 tons, along with an original chime.

On the façade you can see the coats of arms of the United Kingdom and the Argentine Republic, adorned with roses, shamrocks, dragons and thistle flowers. All these symbols are the emblems of Ireland, Scotland, the House of Tudor and Wales. Also, you will be able to admire its great clock, created by the prestigious watchmaker of Gillet & Johnston of Croydon, England. Its melody is the same as Big Ben in London: The Westminster Quarters.

Created by Ambrose Macdonald Poynter, a renowned architect, the cladding is made of cut stone and red bricks. Its structure is located on four steps with landfills in each of the corners.

It suffered from a long period of clause, but in 2001 it reopened its doors as the Information Center of the City Museums, as well as an orientation on the different offers of the museums.

You can visit the tower, every day, from 11 a.m. to 6 p.m. The only day it is closed is Tuesday. Access to the Viewpoint is suspended due to rain and the priority to enter is by order of arrival. Income is limited too. During the year, the only days it does not open are: Saint Friday, May 1 (for Labor Day), December 25 (Christmas) and January 1 (New Year).

To know more places like this, here we tell you everything you can do in Buenos Aires!