Recoleta Cemetery, a walk through its history and all the curiosities of this wonderful and enormous place in the city of Buenos Aires.

Designed as a City 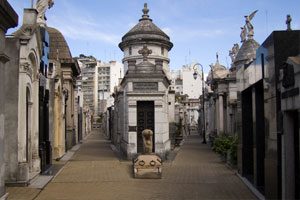 It has 5.5 hectares of land, which in 1822 were taken from the Recollect Monks, who used to use it as a garden. It is built like a city, with streets and avenues, so blocks are formed.

The design was in the hands of the french engineer, Próspero Catelin, who designed, in turn, the Metropolitan Cathedral of Buenos Aires.

Under the mandate of President Alvear, in 1881 walls were raised that surrounded it as a property, its main entrance was added, which currently has those Doric-style columns, and several other things of its interior and distribution were remodeled.

Despite the fact that it is currently a private cemetery, and it is one of the most expensive areas in the city of Buenos Aires, at first it was opened as a public cemetery.

Precisely for this reason, the first people who were buried in this place were a slave whose name was Juan Benito, and a woman of Uruguayan nationality called Dolores Maciel.

Due its structure and the styles of Art Nouveau, Deco, Baroque and Neo-Gothic, it is considered an Open Air Museum.

Really, it is worth walking and touring it all. You will marvel at its 6400 statues, the crypts made in marble with the styles mentioned before, the sarcophagi and the various drawers. Also, you will find religious iconography and some Masonic symbols.

Without a doubt, you will want to take pictures of all the art that is in here! 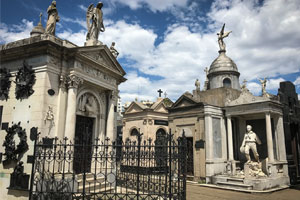 Since great personalities of Argentine history were buried in this place, it is also considered a National Historic Monument.

One of the most famous is, as we mentioned in this other note, Eva Perón. But, just as she is, there are other presidents such as Roca, Illia and Pellegrini, as well as many artists such as Armando Bó, Luis Federico Leloir and Cándido López.

Each and every one of the crypts of these emblematic Argentine personalities are worth seeing. That of Domingo Faustino Sarmiento is one of the most outstanding!

Here we are going to tell you one of the many stories that you will be able to find about the Cemetery.

A man who worked in the cemetery, named David Alleno, saved every peso to buy one of the graves in the cemetery. So much so that he even hired an architect to design his tomb and also a Genoese sculptor.

When his grave was ready, the only thing missing was the body to inhabit it, so, they say, that Alleno ended up committing suicide with poison at 35 years of age.

Some cemetery workers say that, sometimes, they hear noises that come from said grave, as if Alleno was not entirely satisfied with the place chosen to rest!

If you want to know more stories, we recommend that you take the Recoleta Cemetery Tour and find out about the most incredible secrets!