The Rosedal Buenos Aires, romantic paths full of flowers to immerse yourself in one of the best-known parks in Palermo.

Located in the heart of the neighborhood, you will find this famous space full of roses that surround you wherever you walk! 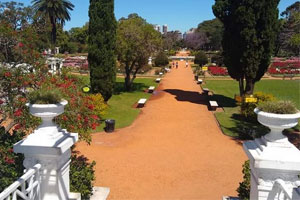 It has more than 18,000 rose bushes, it is one of the most traditional Buenos Aires parks that the city has and is full of works of art all around it.

Formerly, the lands where the Rosedal stands today were known as the Palermo baths, being the property of Juan Manuel de Rosas, governor of the city in the 19th century. After being defeated in the battle against the rest of the country’s provinces, the lands were confiscated by the new government and the design of the Rose Garden as we know it today was decreed.

It was inaugurated in 1914, and in 1929 it received as a gift from the city of Seville, an Andalusian Patio that you can see inside the park. It is a gazebo covered in vines and roses, like a pergola, ending in a sculpture by Emile Peynot. In turn, you will find several sources of water during the walk.

In front of the Rose Garden, you can find the Eduardo Sívori Museum, with a large collection of Argentine art from the 20th and 21st centuries. Also, they usually hold other temporary exhibitions, so we leave their website here for more information.

The Rosedal Buenos Aires is a beautiful walk to do in one day, with several nearby options to visit as well. Here we leave you our note of the best museums in the city, many of which are located a few blocks from here.

Also, we tell you more outdoor plans here, along with the other parks that you will find in this neighborhood, and, in case you want to know more about Palermo, here we leave you more information!