Walk of Vicente López, a beautiful activity to do on the banks of the river, north of Buenos Aires and that allows you to get away from the hustle and bustle of the city.

In 1580, the city of Buenos Aires was founded, on the banks of the Río de la Plata. It was erected as a city-port, to be able to import and export different goods to and from the rest of the world. While commerce is still a very important part of the city, the port is a kind of connection as well. 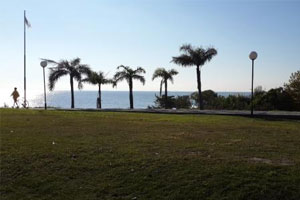 But this area is not simply a commercial area, but has also been transformed into a recreational space from the 18th century to the present day.

It is known more as a space of disconnection and distraction, than for the commerce itself.

Porteños use this walk to escape the hustle and bustle of the city, so we are going to tell you what is the Walk of Vicente López.

As we have already shown you, on the city’s waterfront, there are several recreational areas. In this other note we tell you about the Ecological Reserve and, here about the North Coast Buenos Aires, which joins the Walk of Vicente López.

This walk adds to that list of beautiful places to enjoy the outdoors and the landscape that is formed in conjunction with the Río de la Plata.

Being the first district of the North of Buenos Aires, Vicente López is just leaving the capital of the city. Here, you will find residential areas with very picturesque houses, as well as the waterfront, where the government carried out the construction of the Walk on the banks of the Río de la Plata. 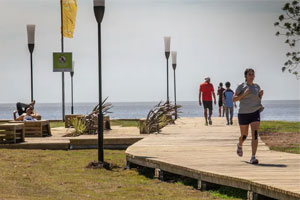 On holidays and weekends, it becomes an exclusive space for pedestrians. Thousands of people come here to practice different recreational activities and sports such as football, cycling, rollerblading, skateboarding, etc.

In turn, you will find a huge green space to rest, enjoying a little peace right next to the river.

It is a place to enjoy and go a whole day, have a picnic and a beautiful walk, since its view is relaxing and will allow you to disconnect from the routine of the city.

Also, you will find several places to eat or drink and its access is quite simple, since it is located near the transit streets of several bus lines. Lines 15, 28, 29, 130 and 152 run through here, which previously pass through Palermo and Recoleta, one of the most renowned neighborhoods in the city.