Manuel Belgrano and the Argentine Flag

Manuel Belgrano and the Argentine Flag, honor, celebration and memory.

Throughout the history of Argentina, we meet several heroes and characters of great importance, so we want to get closer to those who stand out the most from the rest, so that, thus, you can learn more about the foundations of the country. In turn, you will be able to understand why some days of the national calendar are days of commemoration, holidays or non-working days.

In this case, we are going to tell you about two events that have an intrinsic relationship. Every year, June 20 is a day of commemoration and celebration, since the National Flag Day is celebrated, as well as the Passage to Immortality of Manuel Belgrano.

Let’s start talking about Manuel Belgrano and the Argentine Flag, so that you can see the reason for their relationship.

Basically, Manuel José Joaquín del Corazón de Jesús Belgrano, this is his full name although not believe it, 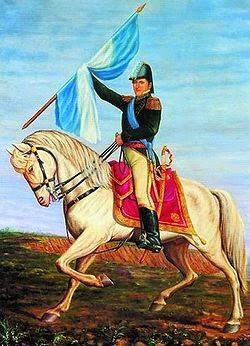 he was the one who created our Flag on February 27, 1812. This occurred during the process of Independence of the United Provinces of the Río de la Plata, where it was raised for the first time in the province of Santa Fe, specifically, in the city of Rosario.

After a succession of changes, which it is said was only in the order of their colors, our current National Flag was defined. Its colors are like those of the sky: Light Blue, White and Light Blue; and in 1818 the Inca Sun (or May Sun) was included, which is located in the middle of it, right on the white strip. The Sun is the image that represents the events that occurred in the May Revolution of 1810, and, in turn, is the Sun that is part of the national currency. So that you know more about the Revolution, we leave you our note here.

In 1957, 14 years after its creation, the National Flag Monument was inaugurated. Today, you can visit it in the city of Rosario, Province of Santa Fe. And if you come here on June 20, you will be able to experience the festivities that take place in the city, with the parade of the longest flag in the world, made in a community way by the inhabitants of Rosario. 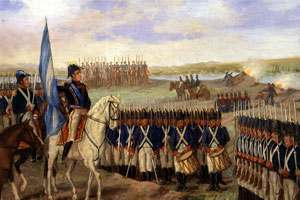 But Manuel Belgrano was not only the one who created our badge, he was also a politician, economist, lawyer, journalist and an important military man. He led many battles, as well as played a very important role in the defense of Buenos Aires against the English invasions that wanted to occupy the city and stay with it. In turn, he is part of the main characters in the success of the May Revolution, one of the most important moments in Argentina.

Now, you may wonder why June 20 is so important if the flag was created on February 27. Unfortunately, in Buenos Aires, Belgrano died on June 20, 1820, of dropsy, a disease guilty of generating several inconveniences for a long period. Due to the National Decree sanctioned in 2011, June 20 was converted into an immovable holiday, that is, every June 20 a day of respect and commemoration is celebrated, paying tribute to Belgrano and our Flag, obviously, that day is a non-work day. 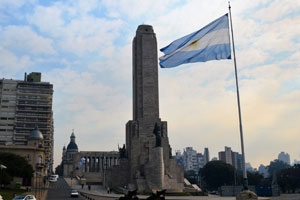 In order for you to understand Belgrano’s dedication to our country, we leave you an extract of his words:

“I serve the country with no other purpose than to see it constituted, that is the prize to which I aspire.”

And, without a doubt, he has served the Argentine Homeland with courage, dedication and heroism.

To learn more about the Ephemeris and History of Argentina, we leave you here the link.